Aalto University Campus and Real Estate operates in the heart of, and as part of, Aalto University. They offer different kind of space and facility services in Otaniemi and Töölö.

Along their efforts the Otaniemi campus is taking shape as the most plural innovation hub in Europe. The campus unifies arts, economics and technologies, and generates significant added value to all in the area, whether they are startups, corporations or research institutes.

Development of comprehensive user-centred campus experience and adventurous utilization of new technologies are part of strategic objectives for Aalto University Campus and Real Estate. The target for mobile available services at Aalto CRE is to create a user-centred interface that connects people, research, services and businesses at the campus.

The Otaniemi campus is growing, both in square meters and amount of students. Aalto University Campus and Real Estate is on a mission to build and renovate great, innovative learning and meeting space at the campus. They want to be a pioneer in developing space utilization models for the growing number of people together with the university.

Aalto CRE was not satisfied with the utilization rates of campus space. Students needed study space, but finding available space for studying or group work in the large campus was challenging. Aalto CRE wanted to make finding and booking space as easy as cycling.

Aalto Space app supports Aalto University’s digital strategy with its seamless user experience and a platform that serves the whole campus community. It is developed for the community by the community.

Aalto Space helps students find and quickly book available study locations. It can be used to find and book several predefined spaces for study and group work for students to use in the Otakaari 1 building and Harald Herlin Learning Centre in Otaniemi. Aalto Space is available for campus visitors also for indoor navigation and adhoc space reservations.

To increase study space utilization rate and efficiency, the booking was designed to work in real-time only. This way students will only book space when they actually need it and are present, which eliminates the problem of students booking space in advance and not showing up. Also, when finding and booking space happens real-time, students can end the booking when they are ready and release the space for others to use.

Aalto Space includes an emergency messaging feature that allows Aalto’s security and safety communications to send notifications about emergency situations within the campus area. With the messaging feature the app is also an excellent channel for gathering feedback and engaging in dialogue with the users.

Aalto Space has been designed together with the users of the campus space and with the entire Aalto community.

Aalto Space pilot was launched in September 2016. Since its launch the mobile app has attracted a wide and active user base. New users join them every day. Among new students, the pilot’s main target group, more than 80% adopted the app and became active users. Aalto Space is not just a nice-to-have-app, it has become an essential digital functionality in the campus space.

Displaying the selection of study and meeting spaces and easy booking makes space usage more efficient. With data from Aalto Space Aalto CRE can track the development of utility rates very easily. The landing of Aalto Space has already changed study space usage and enjoyment significantly, and is ready to expand to new spaces.

In 2017, the Aalto Space will expand further to include other facilities in addition to the Undergraduate Centre and the Harald Herlin Learning Centre. New possibilities for utilising the application are being explored.

on iOS and Android

on iOS and Android 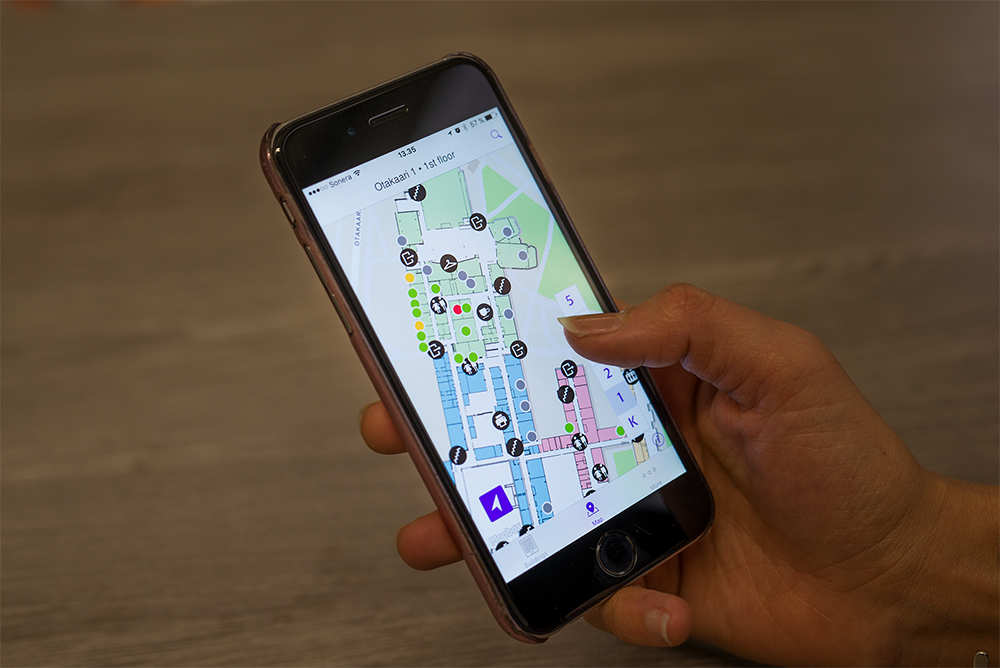